The press release below comes from Rappahannock United Way, which serves as the project lead and fiscal agent for the Virginia ALICE Project. Click here to learn more about how the ALICE model connects to our Steps to Success framework.

FREDERICKSBURG, VIRGINIA — When COVID-19 hit, nearly 1.3 million Virginia households were already one emergency away from financial ruin — a 10-year record high — setting the stage for the unprecedented economic impact of the crisis, according to the state’s latest ALICE report, released today by United Ways of Virginia, in partnership with United For ALICE. 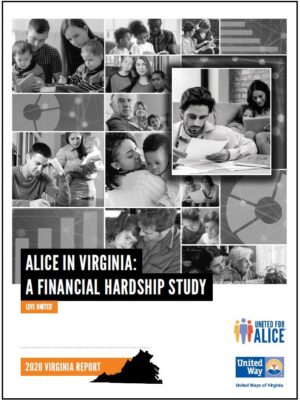 Over the last decade, Virginia’s low-income families systematically lost buying power and financial stability as the high cost of essentials outpaced wages, driving the number of ALICE households to rise 59 percent by 2018, the report shows.

“We’ve known that our economy was increasingly reliant on these families we call ALICE, who are financially vulnerable to one emergency,” said United Ways of Virginia representative Janel S. Donohue. “COVID-19 became that one universal emergency. ALICE families are facing the greatest health and financial risks today, as they are the workers who don’t have health insurance, have no paid sick days, and whose children receive daily meals at school.”

Under the leadership of Rappahannock United Way, twenty-one local United Ways from throughout the state of Virginia have come together once again to produce this updated Virginia ALICE Report; along with the generous financial backing from state-wide sponsors Compare.com, Virginia’s Community Colleges, Atlantic Union Bank, and Virginia Association of Free and Charitable Clinics.

In 2018, of Virginia’s 3.2 million households, nearly 935,000 were ALICE (Asset Limited, Income Constrained, Employed) a record number that were unable to afford the basics for survival, despite working. That’s in addition to the more than 326,000 families that were in poverty. While wages for ALICE workers remained largely stagnant, the cost of six essentials grew on average 3.4 percent annually over the past decade. That’s in contrast to a rate of inflation of 1.8 percent.

As a result, ALICE households grew to account for 29 percent of Virginia’s households in 2018, up from 20 percent in 2007. In contrast, poverty levels remained largely flat at about 10 percent. The report shows ALICE households were locked out of the boom economy and unable to establish savings due to meager pay raises and inconsistent job hours, schedules, and benefits.

“No matter how hard ALICE families worked, the gap between their wages and the cost of basics just kept widening,” said Sarah Walsh, staff lead for the Virginia ALICE Report. “These already fragile ALICE households are now facing an even deeper financial hole due to the state of emergency created by COVID-19.”

ALICE in Virginia: A Financial Hardship Study shows that in 2018, the cost of survival ranged annually from $29,580 for a single adult, to $31,752 for a senior citizen and $78,528 for a family of four with an infant and a preschooler. Putting this in perspective, the median hourly wage for cashiers, the most common occupation in Virginia, was $9.98, or $19,960 per year — less than all the budgets.

This mismatch between wages and costs is revealed by a new measurement debuting in this report, called the ALICE Essentials Index. This Index chronicles how the cost of housing, child care, food, transportation, health care and a smartphone plan rose at nearly twice the rate of inflation, as measured by the Consumer Price Index. The result is that in 2018, two parents working full time needed to earn $19.63 an hour in order to afford the Household Survival Budget for a family of four. That’s up from a wage of $13.68 an hour affording that budget in 2007. During the same period, the number of low-wage jobs grew by 34 percent, accounting for the largest number of jobs in Virginia by 2018.

“The ALICE Essentials Index shows that, through no fault of their own, ALICE families have been priced out of economic stability, setting the stage for the scope of this crisis,” said United For ALICE National Director Stephanie Hoopes, Ph.D. “Using the Consumer Price Index alone to measure inflation provides an incomplete picture of the cost of living, severely underestimating the mounting financial pressures on ALICE families.”

Walsh said the report’s findings should be put in play immediately to identify state and local supports that address the unique challenges the COVID-19 pandemic has inflicted on ALICE families as businesses and schools remain closed indefinitely.  As an example Rappahannock United Way is providing financial assistance to cover rent and mortgage payments to households impacted by the pandemic.

The report calls for stakeholders across all sectors to use its findings to remove obstacles to financial stability, identify gaps in community resources and build data-driven solutions to help ALICE families achieve economic stability, bolstering the state’s economy overall.

The ALICE Report for Virginia was funded in part by Compare.com, Virginia’s Community Colleges, Atlantic Union Bank, and Virginia Association of Free and Charitable Clinics and is a project of United For ALICE, a grassroots movement of some 650 United Ways in 21 states, corporations and foundations, all using the same methodology to document financial need. ALICE Reports provide county-by-county and town-level data, and analysis of how many households are struggling, including the obstacles ALICE households face on the road to financial independence.

For more information or to find data about ALICE in local communities, visit www.UnitedForALICE.org/Virginia.

Founded in 1939, Rappahannock United Way is a local nonprofit organization serving Fredericksburg, Caroline, King George, Spotsylvania and Stafford. Our mission is to improve lives by mobilizing the caring power of our community. Our goal is to have more households emerge from poverty and achieve greater financial stability. Together, we can create opportunities for a better tomorrow. That’s what it means to LIVE UNITED.

Rappahannock United Way serves as the project lead and fiscal agent for the Virginia ALICE Project.

Twenty one (21) independent local United Ways came together throughout the Commonwealth to collaboratively to work together on the Virginia ALICE Project.

About United For ALICE

United For ALICE is a driver of innovation, shining a light on the challenges ALICE (Asset Limited, Income Constrained, Employed) households face and finding collaborative solutions. Through a standardized methodology that assesses the cost of living in every county, this project provides a comprehensive measure of financial hardship across the U.S. Equipped with this data, ALICE partners convene, advocate, and innovate in their local communities to highlight the issues faced by ALICE households and to generate solutions that promote financial stability. The grassroots movement represents United Ways, corporations, nonprofits and foundations in Arkansas, Connecticut, Florida, Hawai‘i, Idaho, Illinois, Indiana, Iowa, Louisiana, Maryland, Michigan, New Jersey, New York, Ohio, Oregon, Pennsylvania, Tennessee, Texas, Virginia, Washington and Wisconsin; we are United For ALICE. For more information, visit: UnitedForALICE.org.