Most parents of young children understand the importance of early education. Not many have a clear plan for how to pay for tuition, which often costs $1,000 a month or more. 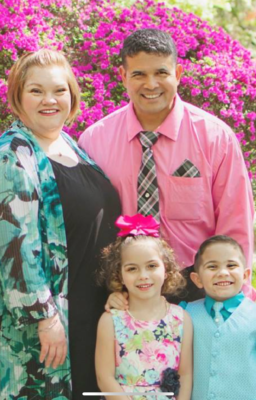 Above: Bonnie, Miguel and their two children.

Bonnie found herself in that exact situation when her twins, Lilli and Leo, were born in 2014.

“We really wanted to put them in preschool. We even found the perfect preschool, but it was just too expensive,” said Bonnie. “At $1,000 a month for each of our kids, it was just not in the cards.”

When Bonnie sat down to do the math with her husband, Miguel, an active duty soldier in the Army, they realized it was more affordable for Bonnie to become a stay-at-home mom.

“With having twins, we really couldn’t afford any kind of child care, much less preschool,” Bonnie said. “It was cheaper for me to stay at home with them than it would be for me to go to work and put all of my paycheck toward the cost of preschool.”

So, for five years, Bonnie did her best to provide a quality early education for Lilli and Leo on her own. She used tools like flash cards and bought a subscription to ABC Mouse. Still, as her kids were approaching kindergarten, there were signs they might not be entirely prepared.

Staff at Southside Elementary School noticed Lilli underperformed on her kindergarten early enrollment screening. At home, Lilli was able to write her name and identify shapes and colors. But during the screening, Bonnie said, she withdrew and was unable to answer most of the questions. Bonnie started to get concerned.

United Way’s Kindergarten Countdown Camp is a free, four week summer program for rising kindergarten students with limited to no preschool experience. The program is taught by licensed teachers and focuses on basic kindergarten skills like recognition of letters, numbers and shapes; as well as social skills like riding a school bus, standing in line or raising their hand to ask a question.

“This program helped my children get acquainted to being away from me,” said Bonnie. “It exposed them to other kids and other adults with authority. I feel like it really helped them understand what to expect when they enter kindergarten.”

Bonnie said Lilli was nervous headed into the first day of camp, but was in excellent spirits by the end of the day.

“I came to pick her up and she said she had the best day ever,” Bonnie said. “I think they just did a great job at camp.”

By the end of camp, both Lilli and Leo had shown significant gains in both the academic and the social skills needed to succeed in kindergarten.

Tia Wilson, the Dinwiddie County Public Schools teacher who led Kindergarten Countdown Camp, said both Lilli and Leo enjoyed being in school and were a lot of fun to have in the classroom.

“Leo has a very outgoing personality and made friends very easily,” said Ms. Wilson. “He liked to shout out answers when camp first started, but soon started to understand that raising his hand was a better way to be recognized. He very quickly learned how to walk in a line and wait his turn. He picked up on our routine very quickly. There was one time he realized that I forgot to hand out scissors for their morning activity, so he did that for me. He is very helpful.”

“Lilli seemed very shy entering Camp,” Ms. Wilson said. “She reached out to her brother often the first couple of days. We tried to separate them a little to allow them to get to know others and not be so dependent on each other. By the end of the first day, Lilli was making new friends. By the end of the first week, she didn’t need her brother to be by her side and was more independent.”

After seeing so many positive changes during camp, Bonnie is grateful to United Way for helping her kids get their elementary school years off to a strong start.

“They were scared about starting school and this was a way for them to take a baby step without jumping all the way in. Now they won’t feel so overwhelmed about starting kindergarten. Now they are more prepared. They are ready to have fun and learn.”