Helping Others with Income-Tax Returns is a Family Affair

This piece originally appeared in the Feb. 3, 2020 edition of the Richmond Times-Dispatch. Carl Miller passed away on May 8, 2020. We are proud to share this story in remembrance of Carl and are thankful for his decades of service to our community. 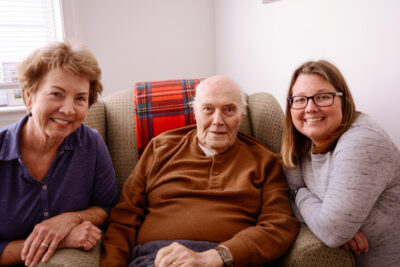 For many of us, the thought of doing one’s income taxes has all the allure of attending a root canal (your own).

In my mind, those who volunteer to do other people’s taxes would appear to have a leg up on sainthood.

Cara Cardotti and her family have made that sort of good work a family affair.

Her mother, Cathy Ghidotti, is a longtime volunteer in the program and is now a site coordinator in Chesterfield County. Her grandfather, Carl Miller, started all of this about 30 years ago when he began volunteering to do other people’s taxes through an AARP program in Colonial Heights.

When I called Cardotti, I was interested in hearing how a love of tax preparation seems to run in her family, and she laughed. At the time she was placed in charge of one of the VITA sites more than a decade ago, she was working with the Hanover County Department of Social Services — and she didn’t even do her own taxes.

And when she learned she would be working at one of the tax prep sites?

“Sheer panic,” she recalled with a laugh. “I called my mom and said, ‘I need to learn how to do my taxes immediately.’ ”

She did, and then took over the entire program in 2014 when she took a new job at United Way. Now, she tells her story in training classes to volunteers to show they also need not be accountants to be able to help.

In 2019, local United Way volunteers helped secure more than $3 million in tax refunds for 3,667 households. The average household income for customers was $22,900.

The sites generally operate on a walk-in basis — some offer appointments — space is limited, and customers are taken on a first-come, first-served basis. Customers must bring valid picture identification and a taxpayer identification number, proof of income and other relevant tax documents. Check the program’s website for details and the various sites: https://www.yourunitedway.org/tax/.

The program “saves money, reduces tax bills and increases the size of refunds for people who need it the most,” said James Taylor, president and CEO of United Way of Greater Richmond & Petersburg, in a news release. Not only that, it “helps ease the anxiety and stress that comes with tax preparation.”

Ghidotti has discovered that taxes are indeed scary for some people. Her dad was not one of them.

He’s always been a “numbers guy,” she said, having spent his career in accounting at Petersburg & Hopewell Gas Co., noting he also was a “stickler.”

Which made him a perfect candidate for tax preparation.

He prepared tax returns of friends for years free of charge, Ghidotti said. In the early 1990s, he started volunteering with an AARP tax-prep program, and even when that ended, he stayed on to provide free tax prep for clients who had come to depend on him.

“He always talked about how much he enjoyed doing it because he liked to do taxes and because it gave him a good sense of fulfillment that he was able to do something for somebody,”

Ghidotti said of her father, who is now retired from doing taxes after more than 20 years of volunteering.

“I guess it kind of stuck with me through the years,” she said of her dad’s involvement with tax prep, which led to hers after she retired from state government, working in the governor’s office at the end. “It was just kind of natural. I guess, as they say, the apple never falls far from the tree. I’ve always loved doing taxes.”

As site coordinator at the Meadowdale Library in Chesterfield, Ghidotti said she is fortunate to have a “wonderful group” of devoted volunteers, some of whom return year after year. The same holds true for the other sites, as well, Cardotti said.

The tax preparers don’t have to be accountants, but they do have to be aware of changes in tax laws every year. Other volunteers help with greeting and screening. Volunteers range from college students to retirees, and the passion volunteers bring to the endeavor is palpable.

What does it take to be a good volunteer?

“It just has to be someone who wants to help,” said Ghidotti, adding that more volunteers are always needed.

Something else she likes to pass along about her father’s approach to tax preparation has stuck with her.

“Everything had to be right,” she said. “He taught us well.”